The update brings a deluge of content, including new quests, trinkets, and tameable animals to Team17’s desert island sandbox adventure.

Thursday, 15th July 2021 – Team17 have today launched the Expeditions Update for survival sandbox adventure The Survivalists on Nintendo Switch™, Xbox One, and PlayStation® 4. Already available on Steam, and coming to Apple Arcade soon, the Expeditions Update brings a host of new content to the procedurally generated islands of The Survivalists including new trinkets, quests, pets, and Taskmasters all available to console players from today.

Prepare for the expedition with the new trailer: 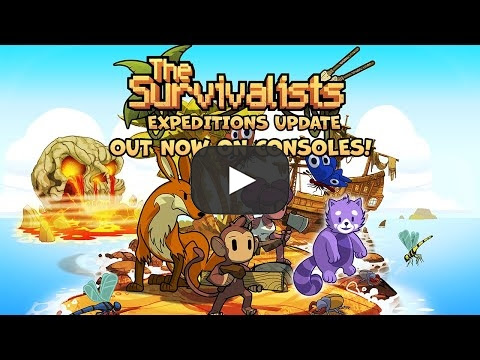 Alongside the introduction of over 40 new trinkets to the game, players now have the ability to equip up to four at a time, bolstering their character with a myriad of effects ranging from burn damage and death bombs, to shields and damage reduction. Four new Taskmasters can also be found lurking around the islands, offering themed tasks that upon completion will grant ever increasing rewards to aid players on their journey. The Expeditions Update offers up a plethora of new content, including five new companion pets, the ability to catalogue animals as well as newly introduced shells and insects in the journal, elite hunts of powerful animals, a new endgame island with more powerful orclings and a miniboss, and much more alongside several bug fixes and quality of life improvements.

A full rundown of the new content now available in The Survivalists, can be found on the Team17 Website.

Review code is available for press to start their very own deserted island adventure.