The Panna d’Or, also known as the Golden Nutmeg, will be awarded to the player who completes the most nutmegs across Europe’s top leagues and competitions in the 2019/2020 season. The winner will be announced on Monday August 24, following the Champion’s League Final.

Data collected by StatsBomb, one of Europe’s leading stats agencies, will decide the winner. The data has already revealed that 360 nutmegs were completed in the Premier League this season, the most out of Europe’s leagues, whilst the Champions League and Europa League have seen their fair share of nutmegs, with 117 and 183 apiece and more to come.

The award has been created to mark the release of Street Power Football, an arcade sports game that brings freestyle football culture to life. The game launches August 25 on PlayStation 4, Xbox One, Nintendo Switch and PC, and features its own Panna mode, allowing players to experience the joy of pulling off devastating nutmegs against bewildered opponents.

Among the players to have completed the most nutmegs this season are Manchester United’s Marcus Rashford, F.C. Barcelona’s Lionel Messi and Borussia Dortmund star Jadon Sancho, according to StatsBomb’s data. All of whom have shown a liberal use of nutmeg rarely seen outside of bakeries.

At the front of the pack however are Atalanta’s Alejandro Gómez and FC Porto’s Jesús Manuel Corona. Both have completed 12 nutmegs this season – enough to make even mermaids wary of a 1v1. 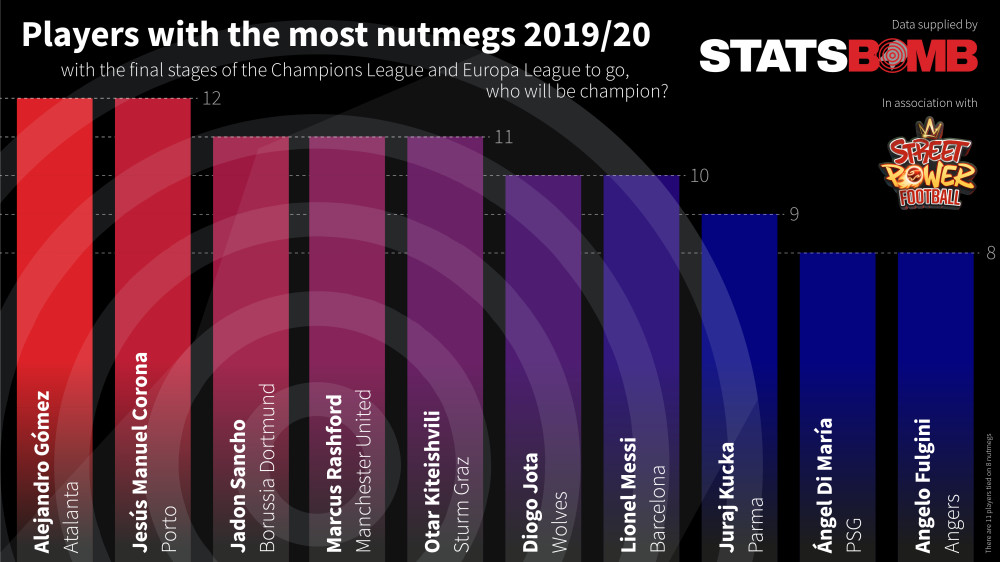 Gómez has the chance to increase his tally when Atalanta play Paris Saint Germain this evening. Rashford too will have the chance to build on his tally following Manchester United’s win against F.C. Copenhagen, and who would bet against Messi increasing his haul?

In launching the Panna d’Or, Street Power Football’s co-publishers SFL Interactive and Maximum Games have also set their sights on finding the next superstar schooled in the art of putting one ball through two legs.

The Panna d’Or winner will have to display a level of skill similar to Street Power Football’s world-renowned ambassadors: a who’s who of global freestyle football legends including World Champions Liv Cooke, Andrew Henderson and the game’s star Séan Garnier.

“Achieving a Panna is one of the most beautiful acts that a body can perform with a ball,” said Séan Garnier, freestyle world champion and a true Panna expert. “It can bring elation from a crowd and humiliation for an opponent. Nutmegs, as the English call them, need to be celebrated as an essential part of the beautiful game and the Panna d’Or is the perfect way to do so. I look forward to seeing who wins this year’s trophy, and then maybe they will be ready to join our line-up of freestyle legends in Street Power Football.”