KONAMI’s #StayHomeWithPES Tournament pitted some of biggest names in football against each other in eFootball PES 2020, including FC Barcelona striker Antoine Griezmann and Juventus’ Miralem Pjanić.

The full results are as follows: 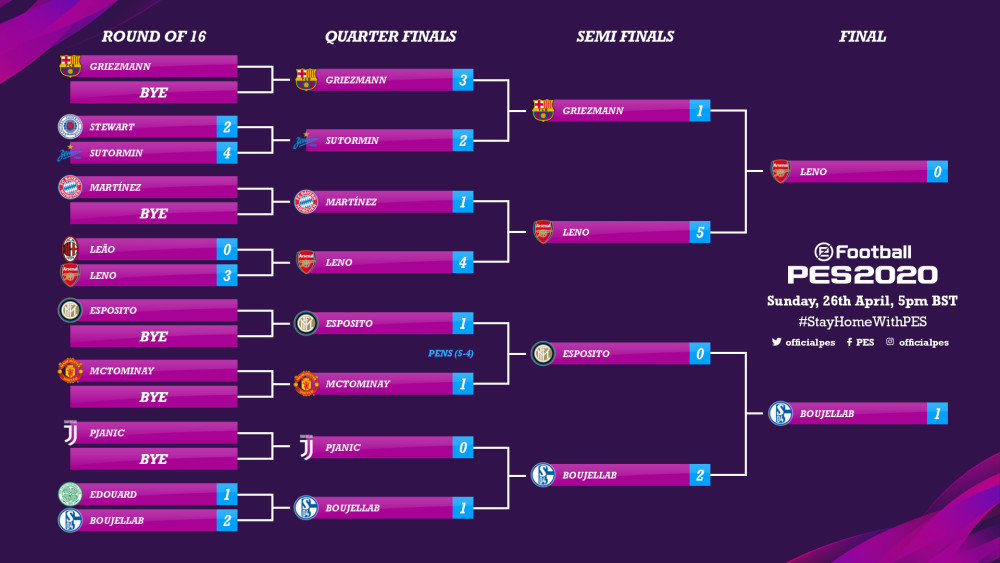 Arsenal keeper Bernd Leno revealed his hidden talents off the virtual goal line as he dominated his early matches starting with a 3-0 win over AC Milan’s Rafael Leão, followed by a 4-1 win against FC Bayern’s Javi Martínez despite a sensational free kick from the Spaniard in the early minutes.

In the semi-finals, Leno was up against tournament-favourite Antoine Griezmann but delivered a crushing 5-1 defeat to the French World Champion.

Meanwhile, Boujellab had to work harder for his place in the #StayHomeWithPES Finals. Odsonne Eduoard put in a solid performance for Celtic, but narrowly left the tournament in extra-time (2-1) and was followed by Juve’s Pjanić after his quarter-final loss (1-0) to the Moroccan international.

For the second semi-final match, Boujellab was up against the tournament’s youngest participant, Inter’s 17-year-old Sebastiano Esposito, who had sealed his position with a tense penalty shoot-out versus Manchester United’s rising star, Scott McTominay (1-1, 4-3). However, Boujellab was looking more confident with every passing match, securing a 2-0 win over Esposito.

Despite Leno’s 12 goals before the final, worthy of the Golden Boot award, the Arsenal goalie was unable to break Boujellab’s confidence or his defence as the Royal Blue player took the match and the championship 1-0.

After the win, Nassim Boujellab commented “Competing in eFootball PES was a very different experience to what I’m used to on a weekend afternoon. But I really enjoyed the tournament and that it provided a small taste of European football again. I’m very pleased to have won.”

For all the action, the full tournament can be replayed on the officialPES YouTube channel – youtube.com/officialpes

eFootball PES 2020 is available now on PC, PS4, Xbox One and mobile.

For all the latest news on eFootball PES 2020 and for further information, please follow:

“e-Football” and “eFootball logo” are registered trademarks or trademarks of Konami Digital Entertainment Co., Ltd. in Japan and other countries or regions.